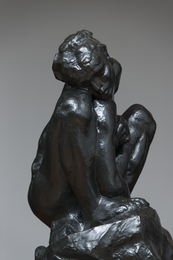 This "Crouching Woman" is more or less identical to the woman about to fall on her back in the tympanum of "The Gates of Hell" at the back left of "The Thinker". The figure in the tympanum has her left leg stretched downwards so that her right hand is tucked between the calf and the thigh of her left leg instead of holding her left ankle. Compared to this independent statue, the figure on the "Gates" appears self-indulgent but free and natural in posture. In this bronze, each part of the body is tightly condensed in an intense frontality. It should be an extremely unnatural pose, but somehow she has dropped off into a doze squatted like a newborn creature in primitive phase. (Source: The Digital Gallery. 1999-2006)