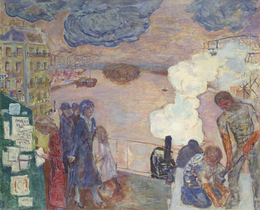 Bonnard liked to paint large-scale canvases that fully exploited their decorative effects. This painting was donated to the NMWA in the early 1990s and it is one of a series of four paintings produced to decorate the house of Bernheim-Jeune, a major art dealer in Paris. Bonnard first emerged as a painter of the Nabis with its reverence for the planar and the painterly. He created luminescent works filled with light and color throughout his life. In spite of this trend in his works, surprisingly few of his paintings are intended as purely interior decoration. Thus the decorative paintings for the Bernheim-Jeune house are an important part of his oeuvre. The four paintings depict scenes from various French regions as they present semi-symbolic images of the bounty of nature and culture. This work in the NMWA is the only one of the four paintings in the series that presents the "city" and the subject of "contemporary life." The scene is set on a bridge in Neuilly, downstream from Paris on the Seine. This area was developed in the 19th century, the site of many factories, and Bonnard is thought to have chosen this setting as the expression of his appreciation of vibrant contemporary urban life. In addition to the figures walking across the bridge, Bonnard also painted an image of sweaty laborers. Smoke pours from the smokestack of a boat making its way down the river. The dynamic composition, which is made up of enlarged foreground elements and an abbreviated middle ground that leads the eye to the distant view, is shared with the other three works in the series. (Source: Masterpieces of the National Museum of Western Art, Tokyo, 2009, cat. no.110)