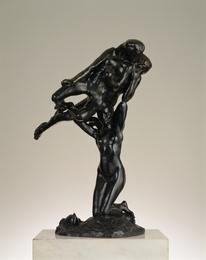 Orpheus and the Maenads

The maenads appear in Greek mythology and are frenzied women who followed Dionysus (Bacchus). Orpheus, who is considered the greatest poet and musician in Greek mythology, is said to have been torn to pieces by Thracian women during the frenzy of the Dionysus festival. In this sculpture, Orpheus' head lies at the maenad's knees. This group of figures also appears on the left-hand side of the tympanum of "The Gates of Hell". The kneeling maenad is slender and yet her body is expressed with vividly sensual curves. This figure also exists as an independent sculpture entitled "Standing Faunness". Of the maenads floating overhead, the front figure was also turned into a sculpture of its own entitled "A Flying Figure". (Source: The Digital Gallery. 1999-2006)