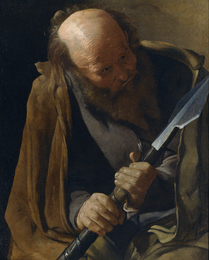 Georges de la Tour was born in the Lorraine district of eastern France in the 17th century, and he spent his life in that district. After his death he was forgotten by history, until he was dramatically rediscovered in the 20th century. Today he is renowned as a painter worldwide. La Tour came to be known as the "night painter" given his many works showing a mystical setting lit by only the light of candles. Today only 40 some paintings are accepted as authentic works by the painter. St. Thomas, newly acquired in 2003 by the NMWA, is a painting that adorns the most recent page in the history of the rediscovery of this painter. The painting is considered a major work from La Tour's early period. It was only in 1987 that the existence of this painting became known. The painting was created in northern France as one in a series of the "Twelve Disciples of Christ", and for many years after its creation the set of paintings was placed in the cathedral in Albi. There is powerful realism in this work, including its painstaking portrayal of each and every wrinkle on the saint's face. This realism combines with a simplified composition of geometric forms created by areas highlighted by the carefully rendered daylight. This combination of characteristics is only found in authentic La Tour works. This series of paintings can be considered "day paintings" by contrast to the "night painting" examples lit solely by candlelight. Here the subject is one of Christ's twelve disciples, St. Thomas, known to have set out for distant India on his proselytizing journey, only to be martyred when spears were thrown by hostile heathens. Here Thomas is shown as a mature man with a full beard, holding his symbol, the spear. This spear alludes to the spear used by the Roman soldier to pierce Christ on the Cross. When Christ was resurrected, Thomas doubted his lord and asked to see the scar of the spear's thrust. Christ showed him the scar and he believed in Christ's resurrection. Here the doubting nature of this resolute saint is splendidly depicted in a diagonally arranged composition. (Source: Masterpieces of the National Museum of Western Art, Tokyo, 2009, cat. no. 42)