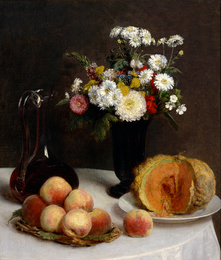 Still Life with a Carafe, Flowers and Fruit

Fantin-Latour's oeuvre can be largely divided into three genres, namely, portraits, still-lifes and allegorical compositions. Still-lifes are a genre that Fantin-Latour was particularly enthusiastic about throughout his life. The motifs in this painting are early summer fruit and flowers, making it a typical example of Fantin-Latour's still-lifes. The painting was created relatively early in his career and is noteworthy for the extremely high quality. The almost square canvas is one of the larger still-lifes created by the artist. The composition, made up of various objects placed on a tablecloth-draped table, reflects the traditional methods of the 17th and 18th centuries. Similarly the motifs chosen -- a wine-filled carafe, flowers in a vase, and fruit -- are all standard motifs in such works. The simple contrast between the dark brown background and the pure white tablecloth and the stylish choice of placing a white china dish and white flowers on top of a white tablecloth are characteristic of Fantin-Latour's style. Moreover, the striking contrast between the hard textures of the glass carafe, vase, and plate and the tactile textures of flowers and fruit is extremely modern. In the 1860s Fantin-Latour's friends, Manet, Monet, Renoir and many others began to create still-life paintings, and there is a considerable connection between Manet's still-lifes and Fantin-Latour's in terms of motifs and compositions. The freshness of feeling and the sense that the scene highlights a single moment of time are elements common to both Fantin-Latour's and Manet's still-lifes. (Source: Masterpieces of the National Museum of Western Art, Tokyo, 2009, cat. no.66)