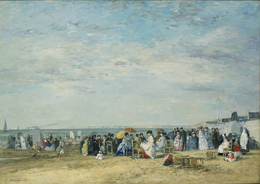 Boudin's creation of numerous outdoor sketches meant that he left few large-scale works. He only created 91 works for the Salon during his career and only painted 15 works before 1870. The most important of these early lively, powerful works is Tourville Bay of 1860 now in the Minneapolis Institute of Fine Arts. The work here ranks second in importance to the Minneapolis work. In the last part of his critique of the 1859 Salon, Baudelaire makes the following warning, "Here we lack works that bring together the scale and beauty born in the gathering of people and monuments that I have to call urban landscapes." It is not clear whether Boudin moved to take this advice, but with the Minneapolis work in the salon of the following year, Beach at Tourville (Private collection, Upperville) in the 1866 Salon and this work, he changed his focus from natural landscape scenes to groups of people gathered at the beaches, rendering them in a frieze-like form. Tourville, a site that Boudin visited incessantly during this period, was known as the most popular resort for Parisians escaping the heat of summer, and one could clearly see the "modern life" mentioned by Baudelaire at this coastal resort. This work was one of the results of Boudin's experiments with outdoor scenes of groups of people that he began in 1860. Boudin's sky, with its broad sense of depth created by brush nuances, fits Baudelaire's description of the "world of meteorological beauty." Boudin painted the lively, bright sense of beach resort life in the groups below this sky, arranging them in a frieze-like band across the canvas. The overall gray tone of the painting further emphasizes the strong red accents. (Source: Masterpieces of the National Museum of Western Art, Tokyo, 2009, cat. no.69)