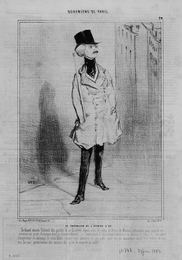 <BOHEMIANS OF PARIS>: (24) THE KNIGHT OF THE GOLDEN SPUR: This so-called former Colonel of the Papal Guard, later aide-de-camp to the Prince of Monaco, awaiting as a prize for his services a distinguished post in the Government!... he would, however, willingly accept a tabacconist's shop or a position as an inspector of [street] sweeping; besides [this] he is a gallant man like all knights of his order, for a trifle demanding satisfaction from five-year-old children, perfectly making excuses from the moment you look at him in the face.