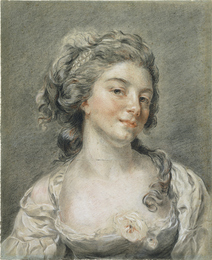 In 18th century Paris, it was the smart upper class women that led the gallant court culture. The domain of art was no exception and by the latter half of the century, an unprecedented number of female artists were active. Bouliar was one such artist who studied painting under Duplessis, painter to the court of Louis XVI, and achieved success in portraiture, a field in which women were traditionally allowed to participate. Comparison with a signed self-portrait of 1792 belonging to the Musee des Beaux Arts in Angers tells us that the model is the artist herself. The characteristic of pastel is exerted in full and portrayed in a soft, bright tone, the artist appears to be full of confidence. (Source: The Digital Gallery. 1999-2006)